Oct. 6 ~ Civility supports the dignity of all persons by affirming their worth and the value of their participation. #civility

*This is something to think about, today. We’ve hit a point when not only are candidates ridiculed and smeared, but their supporters are called names as well. We hear “I’m going to cancel your vote” and taunts like that. The cynicism has reached new heights.

I’m hearing more and more voices in my lifetime that would limit who should be able to vote, and lamenting the many kinds of people who do. And they aren’t talking about race or gender, they’re talking about assumed intellectual and cognitive abilities.

It is simply uncivil to begin to pick and choose who has worth in our system of deliberation and choice. Just yesterday I watched SNL’s “Undecided Voter” gag. And I’ll admit I chuckled a few times. It was a funny, satirical poke at how many of us look at the other voters around us, especially those who disagree with us.

Still, civility demands of us a commitment to the value and worth of the other people participating in our discourse. I tweeted the last couple of days about the gift of allowing the other to speak and be heard. We won’t do that unless we understand our need for the other, their value and the importance of their participation.

This entry was posted in October 2012 Civility and tagged Civility, Participation, Value, Voters, Worth.

Ferguson: The Need to Listen

Before Ferguson becomes old news in the wake of a more recent death or similar narrative to the sad loss of Michael Brown’s life, I want to ask just one thing of my beloved friends and neighbors who are not African American: Please, start listening and validating your African American neighbors’ stories, fears and feelings.

It’s time for us to fully hear and validate the narratives from our African American sisters and brothers across this country. We have to listen, to hear the fear and to hear the pain, and we must accept it. It can be such a blessing to be heard, and such a hurt to be ignored.

When something like the death of Michael Brown occurs, the fatal police shooting of an unarmed young African American male, we begin to hear the multitude of voices saying that this is status quo for their neighborhood. They say that this just part of being black in America, that it’s their fear for their own children, and that it’s just another white man killing a black man. We need to listen to these voices.

I resist listening because to do so is painful. Another armed white man has killed an another unarmed black man, and won’t face any charges, because that’s just the way it is in America. As a white man I cringe and want to look away, to “listen away” if only I could. I want it to not be true. I want it to be wrong. I want to deny the voices. But to deny the words, to ignore the words or to argue against the reality of my neighbor’s fear, pain and frustration, is to add insult to their injury. In fact, it’s worse than insult. It’s further injury.

And yet, listening is exactly what I need to do. I have to listen and believe in the person speaking. I have to validate their story. I must value and give dignity to the experience of my hurting neighbor. If I cannot hear and value my neighbor, then I cannot speak to and journey with my neighbor. I will have already taken from them the value of their presence.

We all need to be heard and validated. When our African American neighbors speak, they must be heard. When their stories are told, we must welcome them to share. And when we are shamed by their words and begin to feel the hurt they are sharing, we must carry it with them. This is the only road to the future.

There’s no way forward other than giving the dignity of thoughtful listening, and the validating worth of being heard. We cannot simply choose a side and hunker down with our arguments in our better neighborhoods and hope for compelling distractions to ease our disquiet… at least until the next shooting.

There are many narratives, and they must be equally heard. The Ferguson narrative is not the only African American narrative of contemporary America, but it is an authentic and valuable narrative that needs to stand alongside the other stories of being an American today.

There are also streams of experience that cut across the many narratives. We won’t begin to find a way forward between communities and their police forces as long as we ignore the real fear, the real pain and the real distrust engendered by histories of abuse, injustice and neglect.

A new narrative comes from our collective pain over the past and present, our redressing of wrongs and our belief in one another. When white Americans quote “black-on-black” crime statistics and point to the background looting that so often accompanies the peaceful voices begging to be heard, we do a deep injustice to the future, theirs and our own.

We cannot just say that we want to move forward. We have to be fully present now. We must trustworthy listeners. Although there is a goodness in attempting to be “color blind,” I’m afraid the weakness of that idea exists in it’s refusal to validate the divergent stories and experiences of different colors.

So, I’m trying harder than ever to listen, and I ask you to as well. Seek out the stories. Let the voices have their say and be heard. I ask you to want to better understand. Toward that goal, I’m reading Black Like Me at the moment. What the heck, I grew up in Texas and didn’t read this in school!? I grew up a few miles from the author’s home town and never heard of John Howard Griffin!!! Come on, Texas! I only know of him now because my dear friend David Gerard, who is African American, mentioned him in a poem I’m going to share in this post. David is also a musician, a poet and a gracious soul.

Years ago I was affected by reading Nathan McCall‘s  Makes Me Wanna Holler, a book of pain that forced me to hear someone’s story that was so very different from my own. It was hard to read and I wanted to argue at times, but his story needs to be heard and understood.

Maybe you have heard of “the talk,” the talk given to young black men by their parents who fear for them? This is a real part of growing up in America for many families, and we should all own that shame and want a better future.

I ask you, to hear my friend David’s poem, and to love him as I do. I’m going to reproduce the poem here and try to get his arrangement as visually true to his pdf he sent me as possible…

when I tell my friends
to go undercover, as John Howard Griffin did
and notice the difference in how they are treated
they accuse me of “playing the race card”

when I was twenty-two,
I was talking with a friend
in the lobby of a moviehouse
when a bunch of cops came in

when the victim saw me
and said to them, “That’s not him”
they took their hands off me and left
without apology

when I try to tell my friends
the humiliation and shame I felt
and their casual disregard
they say, “they were just doing their job”

my friends accuse me of playing “the race card”
but that hand was already dealt to me
the day I was born.

I thank David for telling his story. I pray that we listen better,  and that together we all can make a way forward, a way that tells and values our stories, and writes a better one for tomorrow. 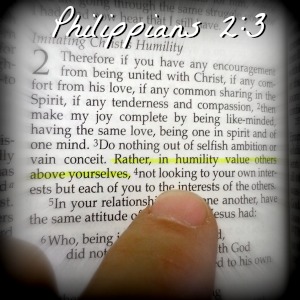 November 23, Civility is a reflection of humility.

Proverbs 3:34, “He mocks proud mockers but shows favor to the humble and oppressed.”

There is an undeniable stream of thought in scripture that highlights the thrill God feels in elevating the poor and disenfranchised, often at the cost of the rich and un-empathetic who have prospered while their neighbors suffer. It’s not a stream of thought that supports a hatred of rich people or a disdain for wealth, but certainly does remind us that God doesn’t judge our value based on our financial bottom lines. In contrasting generosity and greed Jesus famously said, “The first shall be last, and the last shall be first.” (Matthew 20:1-16)

So the Proverb above warns us against a pride which isolates us from God’s favor. God prefers a person to live in humility instead of an inflated idea of self. God favors the oppressed. I think it reflects on God’s character that the joy of the Divine is found in favoring the least able and most needful. God doesn’t sit back and revel in one person’s great accumulation of wealth and pride in self, but in the opportunity to lift another from despair or to reveal that person’s hidden and less known value and worth. I get a strong sense that humility is actually the inner wealth we carry and live, while pride is an infection that can grow from the accumulation of material wealth. I said “can,” not must.

God mocks the mockers. Among the lessons for civility we find in scripture, this one rings loud and clear. A prideful, disdainful attitude that mocks and decreases another’s value is not in line with the movement or favor of God. God isn’t laughing with you when you tear another person down. But a humility that reveals the worth of the other person is joining God in the Divine disposition.

I think civility will be a natural outgrowth of choosing to reveal and support the other person’s value and dignity. It doesn’t mean I have to agree with everyone, but I sure better not value myself over them. I can disagree with someone while still protecting the inherent value of their life, opinions and aspirations. It’s not just that God loves an under dog, God loves to fill gaps of inequity and oppression. Civility, and the humility from which it grows, will create fewer of those gaps by affirming and revealing the value and dignity of others.