I just perused a very welcome update on the Viper interplay between the authors and the voices of protest. I’m glad to see the prayers of many answered in this obviously relational move to resolve the hurt and to move the whole kingdom forward. Amen!

Let’s be honest… like never before our predominantly Anglo majority in our country is having to come to grips with our heterogeneous society on levels and in arenas unimagined. We have to face the shallowness of the much lauded, historic “welcome” that we presented to other peoples who came to our country to share our space and raise their families with us. We also face this within the kingdom of God. The “Viper” parable can be an anchor as we move forward. White folks don’t just write and speak for white folks, and Asian folks don’t just speak and write for Asian folks, and so on… we share the movements of God in this world, and that means we share a heavy responsibility of love, grace and adaptation.

My thoughts on the Deadly Viper controversy… 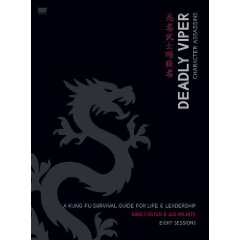 Honestly, I first thought, “I wish this wasn’t a controversy.” But that’s my first thought every time there’s a controversy… I don’t really like conflict. I’ve kept reading and I’ve come quite a ways from that first impression. I’m glad that we’re having this conversation, I’m glad that brothers and sisters of Asian descent have clued the rest of us in on their hearts and this great mistake in communication and publishing.

And a mistake it is. I have not read the content of the book, but then I don’t see this as a content mistake; by all accounts the content gets good reviews. I don’t personally know the authors, but I’m comfortable saying that was not a mistake of intent; they did not set out to be offensive and plenty folks say what good people they are. But surely, this was a mistake of wisdom, what our great tribe of believers across the world and generations has called discernment.

I recognize that kind of a mistake because it hits home with me. I really don’t usually whiff it on the knowledge base. I rarely intend to do wrong. But I’ve been known to blow it on the wisdom of things; I have been too often guilty of a mistake in discernment not to recognize the signs.

I have taken a couple of days to put myself in the shoes of my Asian descended sisters and brothers, and I empathize with the sting of the images and misuse of elements within their cultures and heritages. This wasn’t a conversation between friends; it was a publishing house putting offensive stereotypes and hurtful allusions into the hands of many people who were expected to laugh at those cultural images and illustrations. That’s painful. It was probably not what the authors expected from their meetings in preparing the book. But the book left the safe confines of meetings and drawing boards and entered the public arena. They did not do good discernment. They were not wise. And I have too many friends of Asian descent and am a pastor to many good people of Asian descent not to make an attempt to understand how painful this may be for them. As their friend and pastor I am doing my own soul-searching to see what changes I may not have realized I need to make in my own life and discernments.

Back to mistakes of wisdom… I’ve had great ideas that went on to blow up and land me in worlds of hurtful, unintended consequences. My knowledge was usually pretty tight, and my intentions were stellar… my wisdom was not up to par. When those kinds of mistakes happen, it’s called “Learning Humility.” Humility hurts. Humility is not a quaint Bible study. It’s when reality is introduced to us, shakes our hands and kicks our butts. Humility lessons suck old egg.

But wait, Humility doesn’t stop at sucking egg, it’s also horribly necessary. We need those humility lessons to grow. They remind us to wrap our gifts and abilities in the Spirit of God, over and over again. Those kinds of mistakes can be admitted, owned, and repented of, thereby opening new avenues for God to work through us and do greater things than we have seen and done.

So, I believe the authors need to embrace the humility that demands they repent of their mistake. Let this be a growth moment. It’s not the end of their publishing careers, it’s a potential point of great change for the better. Imagine what two writers of greater wisdom and discernment might accomplish with their obvious gifts and abilities! And they owe it to their spiritual family! We aren’t just all consumers and marketers here, with apologies to the good folks at Zondervan! This is an opportunity to forge the kinds of friendships-out-of-pain that make us a better community of faith around the globe. Embrace the Humility! Humility is a good thing.

An Open Letter to the Authors (Prof. Rah)
Just Another White WordPresser Like Me I Found by Googling the Controversy (But he says good stuff)