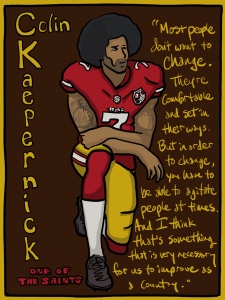 I’m celebrating the Sunday after All Saints this year by talking about one of my favorite contemporary saints, Colin Kaepernick. I haven’t talked much about Colin’s protest last year and the ensuing drama surrounding him, but all things have a time and place, and celebrating saints is the perfect one for having a chat about our brother, Colin. I even made him an icon of sorts. 😁

Colin Kaepernick will be remembered for having initiated one of the most successful and powerful non-violent protests of our lifetime. Yes, he will be vindicated by history and the people name-calling and misrepresenting him will carry the shame. Colin hurt no one, broke no laws and defaced no property, but has been reviled and rejected for making his point. His point is that we don’t want to talk about the real problems, the racial sins of our nation in this very day, but we’d rather just roll along and pretend that America is all peaches and cream.

Does it strike anyone as interesting that we are so riled up over the protest of an athlete? He’s essentially an entertainer, and his entertaining skill is his athleticism. He earned his place on that team, in that uniform, in that game, and he chose to use what he had earned to quietly send a message: It’s not all OK in America. It seems we don’t like having our sins pointed out, even in quiet non-violent ways.

He lives out of his faith. He is marked by it. His life is animated by it. That faith binds him to us and to everyone who cannot command the stage of our nation’s conversation and say:

“I am not going to stand up to show pride in a flag for a country that oppresses black people and people of color… To me, this is bigger than football and it would be selfish on my part to look the other way. There are bodies in the street and people getting paid leave and getting away with murder.”

He’s done all this, has submitted to the ridicule and hatred, has possibly sacrificed his career and has been demonized and vilified by voices around the country, all to speak up for the voiceless. He kneels to stand for the defenseless. He is a saint. I hope that more of us have an opportunity to show his courage and to work as hard for the change that our society so desperately needs.

Colin speaking for himself:

We need to talk about Colin and the nonviolent protests by other players because it is bringing out the worst of our nation. From faked images like the concocted flag burning by a Seahawks player, to the President cursing our citizens’ use of their First Amendment rights, to the Texans owner referring to the players as inmates, we have a real problem on our hands. There are prominent voices in our country who don’t want things changed, problems addressed and racial inequalities seen for what they are. This is why Colin is so important. This is why his faith and courage matter in this time and place.