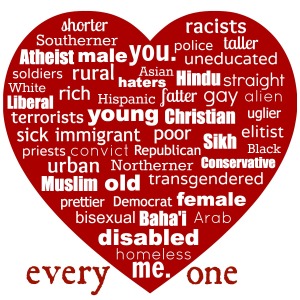 I was driving to work this morning, to the sounds of my radio and the BBC World News, no bombs, no gunshots, no screams. The program was about Syria and the experience of everyday folks still trying to make a life in the war-torn city of Aleppo.

My soul is heavy and burdened for the thousands killed in that conflict, a death toll estimated to have almost reached half a million people as of February. The number of refugees has been placed at 4.5 million. Let this quote sink in for a moment: “More than 85 percent of the country is living in poverty, with close to 7 in 10 Syrians stuck in extreme poverty — unable to afford essentials like food or water. At the start of the war in 2011, joblessness stood at 14.9 percent. By the end of last year, it surged to 52.9 percent.” from the Syrian Center for Policy Research.

These victims of a brutal war are women, men and children, our neighbors. Love them. Each and every one of them is a human being made in God’s image, carrying the value and worth that God has placed within each of us. They are God’s beloved. They have died and they are hurting, and so I pray with them, today.

Pray with me for peace to break lose in Syria. Pray for the fighters and the rebels, the soldiers and the leaders. Pray for the mothers and fathers, the children and the entire nation to know peace. Pray for the souls of the dead and the tomorrows of the living. Stop and desire in your heart the best for them and the richest of choice blessings. Sit with me and we will bend our wills to love them deeply.

I learned an East African proverb from our mentors at seminary years ago, “When the elephants fight it’s the grass which suffers.” Pray that the love of war, the pride of hate and the tendency to violence may be overcome. Pray that the winds and ravages of war may end and that the Syrian people can again stand straight and tall in the warmth of God’s sun.

All things to God’s glory and the blessing of God’s world.