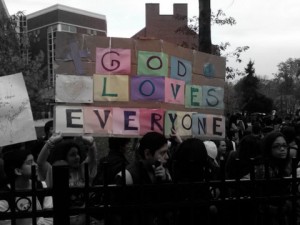 It’s June, and June is Gay Pride Month. Whenever June rolls around we start seeing and hearing a lot about parades and things, and there’s always a bit of a push back from some folks about the issue of gay pride. It’s very similar to the push back against the annual Black History Month each February in the U.S.

Antagonistic responses to gay pride will sometimes take the form of exclamations of “heterosexual pride!” The similarity with Black History Month heard in questions like, “Ok, so when is White History Month and maybe Asian History Month, etc?” For many, especially us straight white people, these seem like compelling questions and responses. I’m writing this post in the hope of broadening someone’s understanding of why we have gay pride, and what these responses to gay pride sound like outside of StraightWhiteMaleLandia.

I know all about StraightWhiteMaleLandia because I grew up there… in fact, I’m still a citizen. But being straight and white doesn’t mean that I don’t have a responsibility to love and to know all my neighbors who aren’t straight or white or either. It also means that I am going to have to want to know and love them… I can’t just mistakenly believe that their lives and experiences mirror my own.

As a straight white male I have had a certain general experience of life, that though it has had some elements and events unique to me, is in many ways a shared experience with other straight white males. In general, in StraightWhiteMaleLandia, other straight white males have always held majority control of politics, business, education, economics, military and policing. I have had to work hard for what I have, but in general, hard work will pay off for me. I’ve had some unpleasant people in my life, but again in general I’m not harassed by the police, unduly denied access to financial or employment opportunities… and flesh tone bandaids look awesome on me! Oh, and since my family hails from StraightWhiteMaleLandia, enjoying citizenship therein and avoiding any major mishaps for a few generations now, even my childhood was free of most deprivations.

If you happen to live with us citizens in StraightWhiteMaleLandia, but aren’t… as in you’re gay or non-white (or nonconforming to StraightWhiteMaleLandia’s assumptions on gender roles and definitions), you won’t have had the same general experience of life I’ve had. Without a doubt, your life will be a bit different. You know this already (as you’ve lived the reality of it), but it might surprise you how many in StraightWhiteMaleLandia don’t realize how different your life can be. We haven’t lived with the disenfranchisement or been the object of difference and ridicule. We don’t know the visceral feelings of rejection or the judgment of our value and worth based on prejudice and bias. From those flesh colored bandaids to the very language and vocabulary we use every single day, we are affirmed as normal, right, correct, standard and well. We don’t know what it’s like to be labeled as abnormal, wrong, broken, outside or gross. We take pride for granted.

Here in StraightWhiteMaleLandia it’s weird to think someone else might be celebrating pride in themselves, and it seems to even be a bit threatening to those of us who have cornered the market on pride up until now. So, my fellow citizens, my tribe of straight white males, we need to stop and stretch our minds and hearts a bit. We have seen our country make some great strides in equality in the past 50 years… but we still have neighbors who are dealing with generations of systemic and hurtful injustice. We still have neighbors who haven’t had the centuries of political, educational, legal and economic control as a demographic. We still have neighbors who authentically experience a deep and distressing disenfranchisement in our land.

Please don’t take a gay person’s pride as an affront to your own. It shouldn’t be too threatening to you. In fact, you should be glad that in our country we are more and more experiencing the actualized freedom of being ourselves. You see, one day you might find out that you’re not as straight, or as white or as male as you thought. You might even end up doing some traveling outside your zone and find yourself getting to know some amazing new friends in places like GayBrownMaleLandia! The respect and dignity affirming behavior you would hope to receive from them, that’s the same kind thing they’re hoping to get from you and me today in our land.

All lightheartedness aside, there’s a real need for us to be speaking and responding with much more grace and love. When we facetiously mimic or just ridicule our neighbors for their efforts at expression and celebration we aren’t doing anyone a favor, especially not ourselves. In fact, we simply affirm anyone’s assumption of our mean-spiritedness and lack of civility. You see StraightWhiteMaleLandia is actually for real! We live there! But being the majority is not a license to devalue or to relegate  any minority to unjust treatment or an assumed lack of worth and dignity. Gay pride is needed in a land where too many young people take their own lives, or attempt to do so, and suffer from having their pride and self worth stolen away on a daily basis by violence and bullying. (Stats on violence against gay youth at the CDC, and The Trevor Project.)

You might not be out walking in a Pride Parade any time soon… but you can chill out and love your neighbor a bit more. Drop some of the rhetoric against others. Be grateful for the pride you have in yourself and for living in a land where you can be you. And as Thumper taught us…

Love ya. Love all of ya, Todd

This entry was posted in Just Life.

One thought on “Gay Pride and StraightWhiteMaleLandia”

Reblogged this on LifeInCocoon and commented:
A few thoughts for my straight followers.